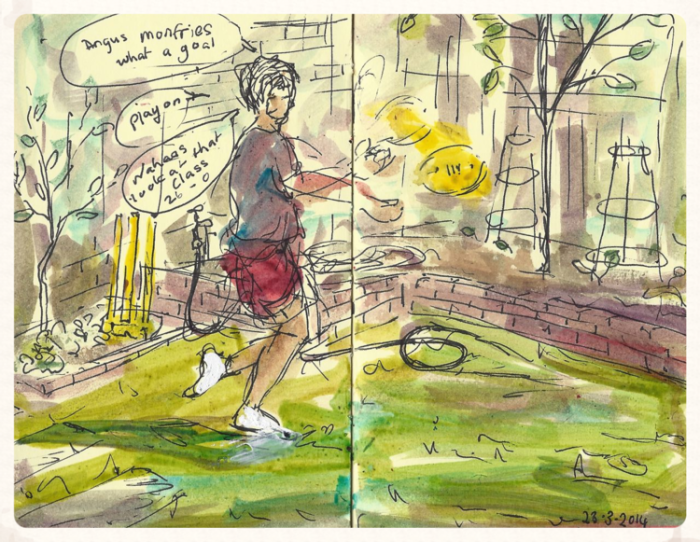 I planted some seeds in the garden a couple of weeks ago. They were Yates Sweet Peas, Brilliant Fragrance, Perfumed Pastels; the ones that come in the silver foil packets. I picked them up for a couple of dollars at the local hardware, where they hung by the cash register.

I noticed over the weekend that the seeds have germinated. Fresh green shoots poking their way through the moist soil, soft and fleshy, unfurling in the manner of an infant newly arrived.

At the same time, the first green shoots of the footy season have also sprung. With this first round of the fixture taking just as long as the sweet peas to germinate and with no clear opener to kick the season off, it has been a dubious and drawn out start.

Not that any of this matters much to me.

The last couple of weeks have been busy; kids tennis, basketball and volleyball commitments; and with cricket over and out, the usual stuff that goes with footy is well underway. Training has begun and footy club emails appealing for parental involvement are sitting in my inbox awaiting considered replies.

I’ve also been caught up with another realm that comes with the season; pleading requests whenever I head towards the shops “… make sure you get footy cards, the ones that come with the paper, packet number six, …….they’re free”.

Well, the first packet in the series was free, but the subsequent nine were not.

Two dollars for a pack of six champions was just the entree. To maintain this budding collection, I’ll be up for about three dollars for each silver foiled packet that, like the above mentioned seeds, will also sit beside the stockists cash register. The matching album will hold about four hundred cards.

I don’t mind, though. I know the season, in whatever form it takes, will feed and nurture the young, growing mind and body, of both my youngster and that of his buddies. It will also keep us adults engaged and connected with our kids and the wider community. I’ll do what I can to do my bit during the season and seek respite amongst the brilliant fragrance of the sweet peas if it all gets too much.

In the meantime….Carn the Tiges!