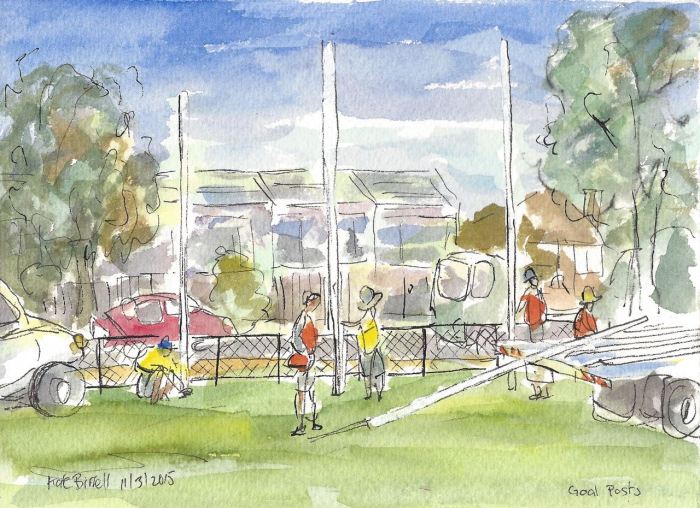 Driving to school this morning with my youngest.

I knew they had gone up, as I had limped passed the oval the day before with a sore calf muscle. A summer hiatus in my usual exercise routine has seen my muscles atrophy and struggle to cope with the moderate 6km power walk around the neighbourhood.

Stopping for some respite, I was surprised to come across this crew of goal post installers. Five or six of them, seemingly doing the rounds of Glen Eira. Surely it’s too early for footy? Backyard Big Bash doesn’t seem to be anywhere near over.

Embryonic lemons sit snapped and forlon upon the mushroom compost, belted from their stems by excessively ambitious cover drives. There remains a constant thwack against the wall outside, the windows and the portals of the family home; even as I speak, theres a declaration of frustration from Davey Warners father downstairs as a cricket ball swings inward, flying through the backdoor, ricocheting off the kitchen table only to bounce and dribble its way in under the TV cabinet.

Whilst the aspiring first grade cricketer thinks it a superb shot, it has disrupted his fathers engagement with Who Wants To Be A Millionaire.

Lately, the older brothers have joined in again. A renewed interest has seen a longer than usual domestic cricket season being played out on our home made wicket. It’s been a bonus for strengthening fraternal bonds, possibly not in cementing friendly neighbourly relationships, though. Older boys mean louder, angst ridden and hormone fuelled declarations.

Together, they are a compelling and somewhat exclusive force. At pivotal moments they chorus in unison. Their voices pierce the suburban quietude into slithers of expletive encrusted decibels.

To myself, I hope they’re at work, hard of hearing, busy tending the Camellias or the vegie patch, oblivious to our backyard contentions; or perhaps newly arrived from other places, yet to discern the fruity nuances of our language.

I decide it’s time for tea….and that it’s not too early for footy.