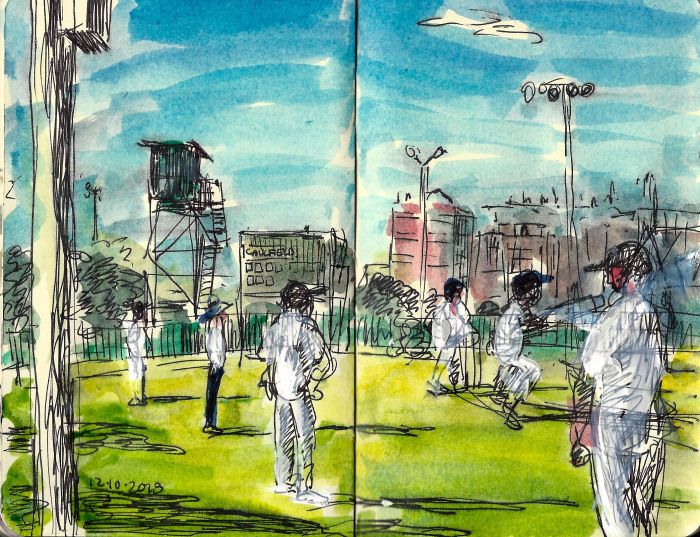 The season has changed and a wet winter has become a windy spring.

It is late afternoon on Guineas Day and I am walking passed the local oval. Goal posts have gone, the mud has dried and the turf wicket is down. Whites replace the blue and white Grammarian guernseys and a game of cricket is in progress.

There are no spectators here today.

Over the back fence at this oval lies the Caulfield racecourse. It is also known as the The Heath, for the rugged low lying vegetation that once covered the sandy soils in the early days of colonial settlement.

A gusty north wind blows track dust and the smell of horse manure across the ground and into the face of an oncoming bowler. He bowls wide, down the off-side. The TVN broadcast can be heard in muffled and broken tones as the stampede of galloping hooves pass unnoticed by the fielder at deep fine leg.

Is that the voice of Greg Miles? I’m not sure it is and if not, then whose voice is it and where is he calling from?

A few young race goers stagger by, heels in hand, jackets draggled over shoulders and ties dangling. They haven’t waited for the feature at five forty-five; nor have they waited to see Birds of Tokyo perform live. Their own feathers have been ruffled by the glorious sunshine, lagers and sparkling whites, that have been served in plastic cups and foil sealed champagne flutes.

The girls are tired and the boys want another beer.

They really do not care that Long John won the Guineas, or that Atlantic Jewel could be a superstar in the making. They just want to rest their weary feet and find a cab before the rush.

A bit later at home my phone rings.

Just wondering…… Can a you pick me up from the track?

Yep, I’ll pick you up at the roundabout shortly.

How was your day?

Great, he says, getting into the car with tie dangling and top shirt button undone. He reaches into his wallet and passes me a crisp fresh pineapple.

You had a win?

Ok, I’ll use it for dinner.

On the way home we stop by KFC for the Super Variety Bucket. We dine on the outside deck and watch the kids play cricket as the sun and the dust of another spring day settle quietly over The Heath.