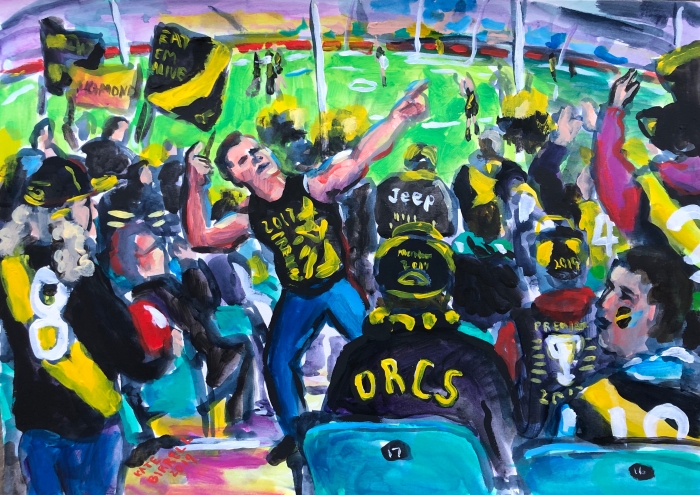 On Friday evening I sat up on the top deck of the Sky Bus as it glided smoothly down the Tullamarine Freeway from the airport.

I had a great view of the passing traffic. There was an order and a rhythm that made the trip feel comfortable.

Gear and lane changes took place with seemingly effortless transitions as the driver scouted his surrounds, always knowing his position and that of the other vehicles.

There was the occasional hiccup with a slow moving vehicle, a learner driver, or merging traffic, but easy adjustments were made to account for the lost ground.

After a week in Bali this short road trip into Southern Cross station was in stark contrast to many of the Balinese roads where the same distance would likely take at least twice as long; with stoppages and congestion making a simple journey complex.

I felt good, and in that post holiday way I was looking forward to slotting myself back into my own daily routines, even if that meant working, cooking meals and dealing with minutiae.

I was also feeling good about the Tigers 2019 season.

The last few games I’ve been to have seen the team pull together in a coordinated and streamlined manner, entertaining us fans in the crowd, enabling us to feel just a little bit good, a little bit comfortable and, even a tad hopeful as each week has passed.

As newer and younger players step up to fill the void of the injured and experienced a sense of optimism pervades.

With seats booked for the Richmond v Port Adelaide game the following day at the MCG; Punt Road End; M2 Row R, I was excited to see what sort of game would play out.

Could Dusty build on his return to form?

Could Houli, Grimes and Prestia maintain their stamina across the ground linking team mates in goal bound chains?

I was dying to see Jack back.

I was hoping Lynch could maintain and build his upon his inner sense of confidence.

I was hoping that other Tiger fans also felt good.

After nine sultry Balinesian days I was in need of a winter footy fix. I was in need of the colour, the movement and the atmosphere that is my home town and my team; our culture and our language.

As one of the cheer squad flags down on the fence, Punt Road end, states “If you Love Richmond Stand Up”… and so it was with hope and optimism on Friday night that I did stand up and alight the Sky Bus at Southern Cross Station.

It was 9pm and given that I was travelling light, one backpack at 5.6kg, I headed for Platform 12 and my connecting homeward bound suburban train on the Frankston Line.

On this occasion, that which is often an arduous journey to or from the airport, seemed easy.

I hoped that tomorrows game would play out the same way.

P.S. With great company in my youngest H, other half GB, friends, Noel, Jack and the nearby Tiger army, my good feelings were not pummelled.

Lynch played a solid game, Dusty covered plenty of ground, Jack was alive and in the mix.

Sydney seemed a bit flat and Mabior, perhaps a touch off the mark.

As a team the boys played with a methodical and organised rhythm for much of the game enabling them to glide smoothly up into fifth position on the 2019 ladder. Richmond defeated Port Adelaide by 38 points on a bright and sunny Melbourne day.

May the good feelings continue into round 19.

(Image: Tiger Fans; After Duursma, Acrylic on A3 paper)